Of all the systems at ST1, it’s the software systems that are the most dynamic. Maintaining 3 different OSs on 5 different machines that together host over 25 astronomy specific applications is no small endeavor. To further complicate matters, many of the applications are hubs that integrate, or cross-integrate, other applications. If any one of the links breaks down, the whole system chain fails. Although it would be nice to get to a working platform and leave it alone, there are always updates of some kind that need to be tested and applied. These range from small patches to full version upgrades and keep the AI2 software engineers very busy. Following is a rough assessment of what’s in place to run current operations at ST1:

– 2 Windows based laptops for on-site observatory control.
– 1 Mac based laptop for session planning, data reduction and image processing
– 1 Linux Debian 9 based Apache Geronimo application server for remote operations and data storage
– 1 Linux Debian 9 based Apache HTTP webserver w PHP & SQL to run the reservation system. This ai2observatory.com site is hosted outside the AI2 network but will likely be migrated in at some point soon.
– NAS storage is managed using Ceph

The application server hosts all the applications associated with performing research and running observatory operations. The user facing applications are extended to remote users (via terminal services or RDP) or to on-site users at the Windows machines.

DRIVER HUB
– ASCOM
The AStronomy Common Object Model (ASCOM) is an open-source platform that acts as a layer between the hardware and the client removing any hardware specific dependencies. Each device manufacturer will write their standard drivers for Windows, Mac, etc as well as for ASCOM. They will expose their device specific features into and out-of ASCOM using the ASCOM defined properties and methods. Just about all Astronomy devices are now ASCOM compliant meaning that they can all be interfaced together and exchange data using the ASCOM hub.

MOUNT CONTROL
– EQASCOM (EQMOD)
EQASCOM is a application designed specifically for mount control. It sits on ASCOM which manages all communications to/from the mount*. EQASCOM offers a comprehensive UI containing a long list of configuration and control features. Build a pointing model using sync commands, map periodic error, set limits so the scope doesn’t impact the pier, park and un-park, manually slew, choose from one of many tracking rates, perform pulse guiding and much more. 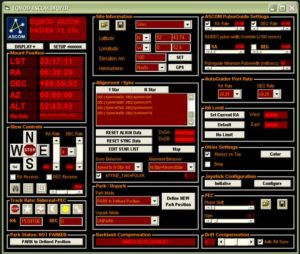 DATA ACQUISITION & CORE CONTROL
– MaximDL (MaxDL)
MaxDL is the central application used to setup the data capture routines for AP/Photometry/Spectrosopy. MaxDL also controls all the dome operations, performs the precision focusing, spins the filters, cools the CCDs, and brokers the in/outbound commands between the device specific applications (most of which are described below) via ASCOM. 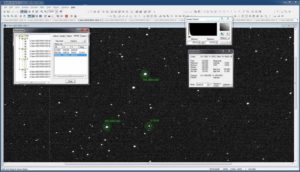 DOME CONTROL
– AstroMC
This is a feature rich application used to operate the dome’s shutters and spin the dome to the proper azimuth….basically slaving to the scope. There are a number of motors and actuators that handle the physical lifting and spinning via Foster Systems control boxes. AstroMC is the front end application that communicates with these boxes. Is it’s current implementation, AstroMC acts as a ‘driver’ between MaxDL and Foster boxes. All the dome commands are executed in MaxDL and ‘handed-off’ to AstroMC via ASCOM.

From the main AstroMC UI (pictured) there are controls for the shutter open/close, the dome rotation/slaving, parking, synching etc. Within the menus you will find many other configurations for the motors and switches. 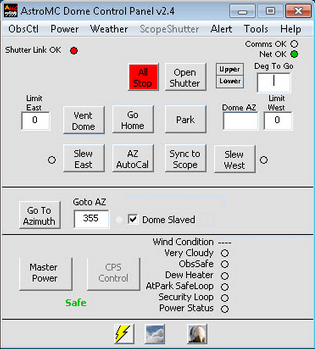 POINTING
– Stellarium & Stellarium Scope
Stellarium’s extensive object database (almost 300 million entries) and intuitive graphical UI make it easy to locate targets and simulate sessions. Once an object is selected, it is only a click or three to determine rise/transit/set times as well as most other common object attributes. Pointing also happens with a simple command and the object lands at the center of the FOV. The Stellarium Scope application handles the communications between Stellarium and the mount (again via ASCOM).

GUIDING
– PHD2
The most top-of-the-line professional mounts out there will drift at some point as they track an object. They may also exhibit small inconsistencies in the motor drive speed and the gear mesh. These tiny imperfections, over time, create a smearing of the data being collected. To offset these affects astronomers implement guiding devices and procedures. PHD2 is an off-the-shelf guiding applications that locks on a star and forces the mount (through perfectly timed speed-up/slow-down commands) to stay fixed on an object for an extended period of time. 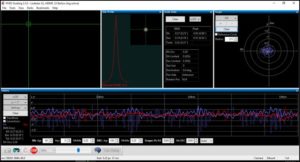 POST PROCESSING
– PixInsight
For processing AP noting gets better than PixInsight. It’s not as intuitive as other applications in terms of navigation and basic operation and it will take a new user a while to figure out how to get things done…..the payoff however is enormous. Editing options are broken down into ‘processes’. There is a very organized menu of processes but each has its own effect, list of settings and combinations. They are very specialized to a particular type of correction and the order in which the are applied is crucial. There are dedicated books on the application as well as courses and seminars. 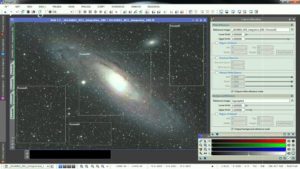